These fish are fierce, they’re big, they’re colourful, they’re powerful and they can all be caught in the Bismarck Sea off New Britain Island in Papua New Guinea. PNG is world-renowned for its fishing but what are the Top 5 fish to catch in Papua New Guinea and how can you catch them all in 1 trip? 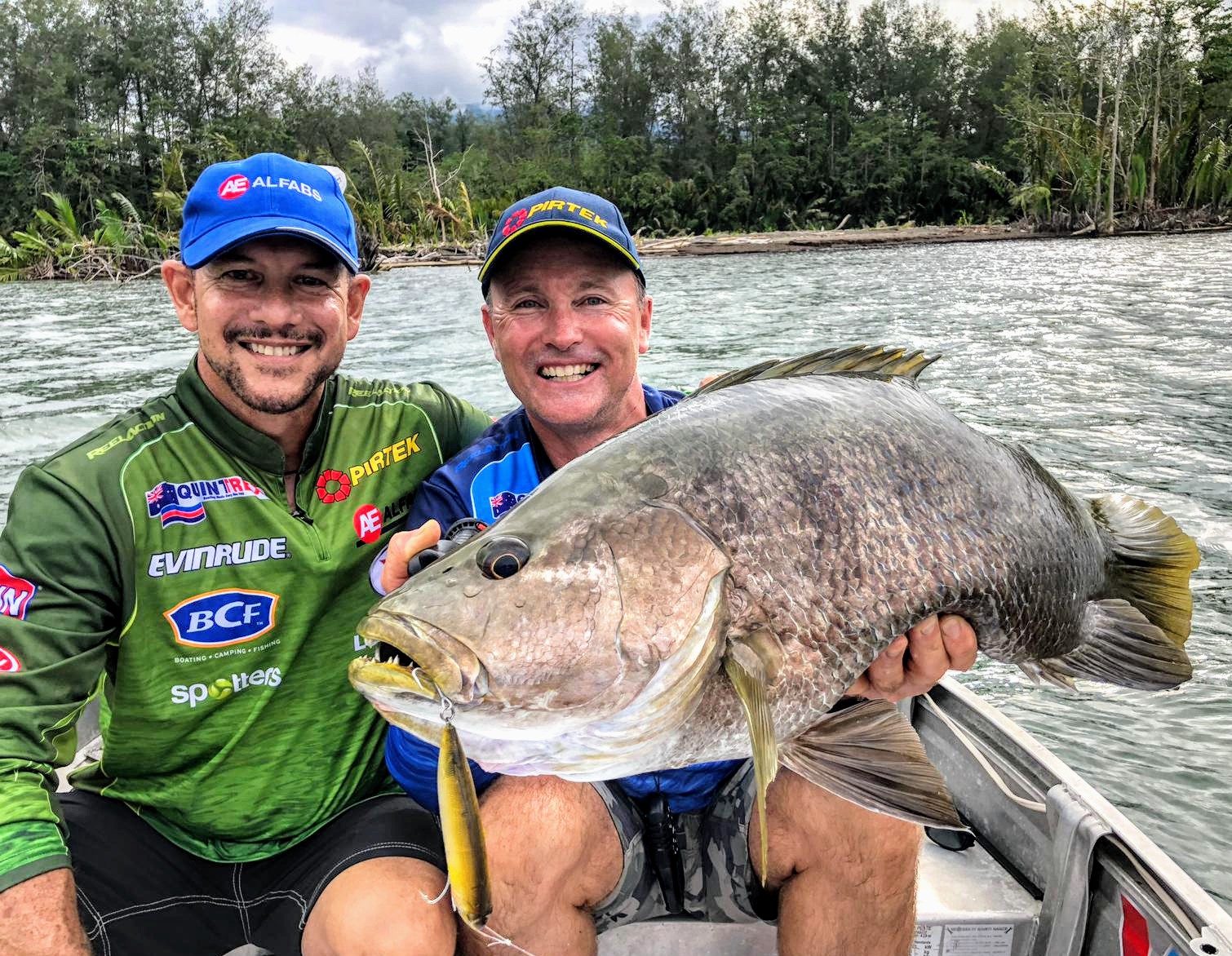 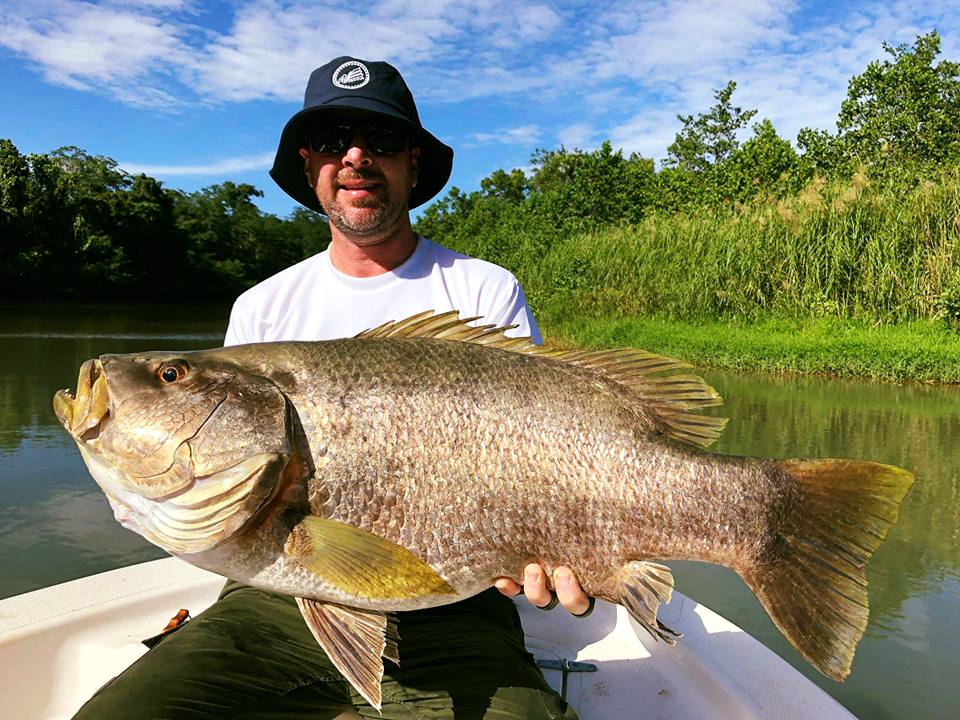 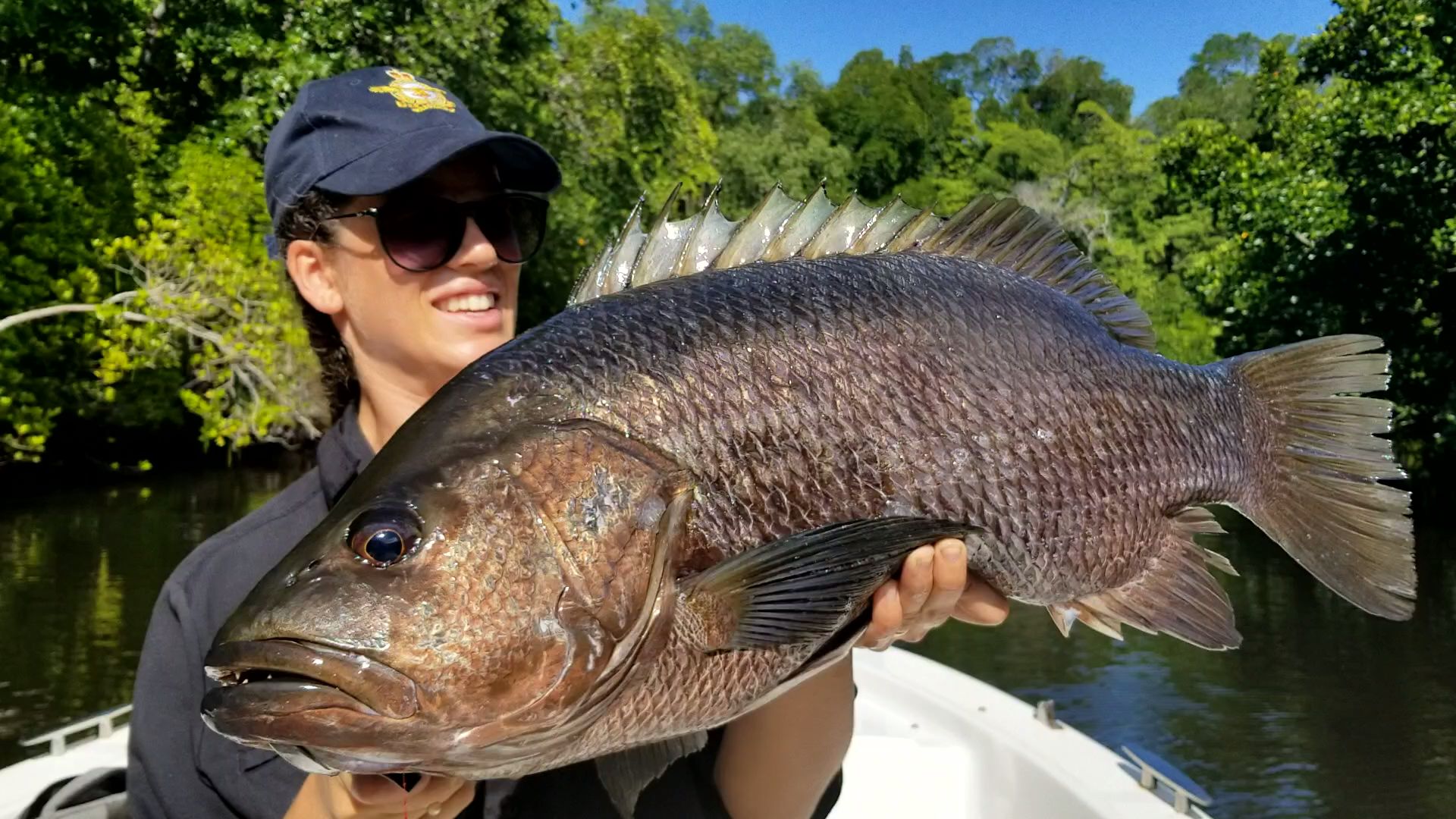 To start of the list we have the legendary Papuan Black Bass which is known for its extreme fighting capabilities, rod busting and lure smashing. Also known as the freshwater snapper and locally known as mogillo, these magnificent fish are renowned around the world yet little is known about their biology and behaviour. With excellent eyesight, striking ability and camouflaged tone, the Black bass are ambush hunters, aggressively striking lures from their snaggy habitat. But there are only a few places around the world that anglers have easy access to rivers to catch these species. Luckily here at Baia Sportfishing, we have been giving anglers the opportunity to hook-up since 2004. Most anglers are after the biggest bass possible and good news is that these species are known to grow up to 70lbs! You will be astounded by how strong some of these fish are. Get your poppers, divers and favourite lures together as there is only one way to find out how mighty these fish are.

Habitat: Rivers and Estuaries in clean or murky water. Usually live among snags and under over hanging trees in a territorial area. They will also patrol down to the river mouth and swim in open water. 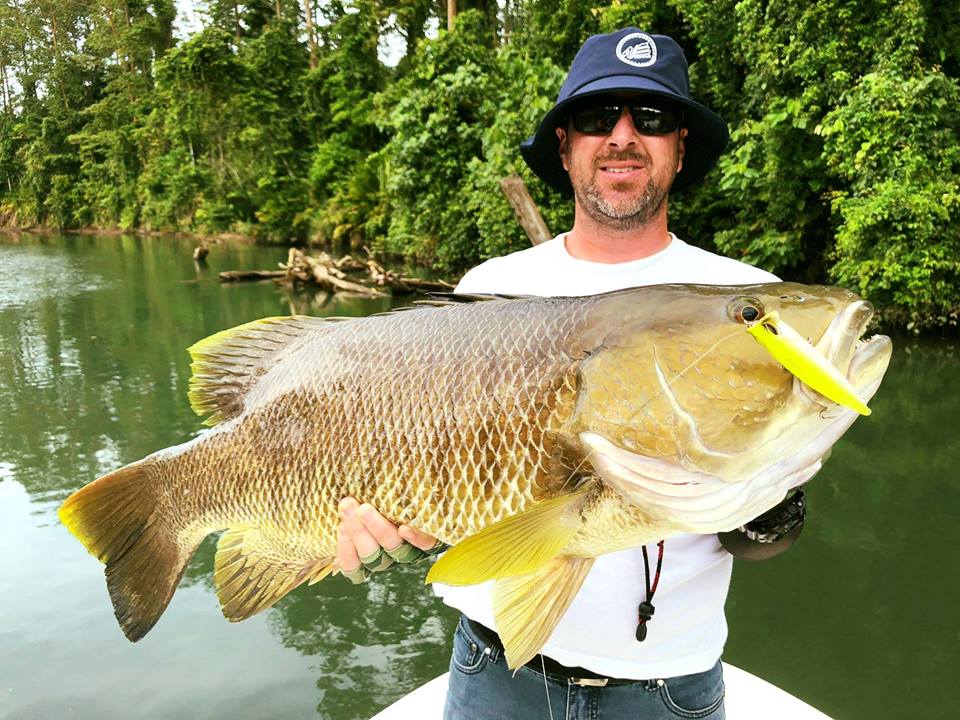 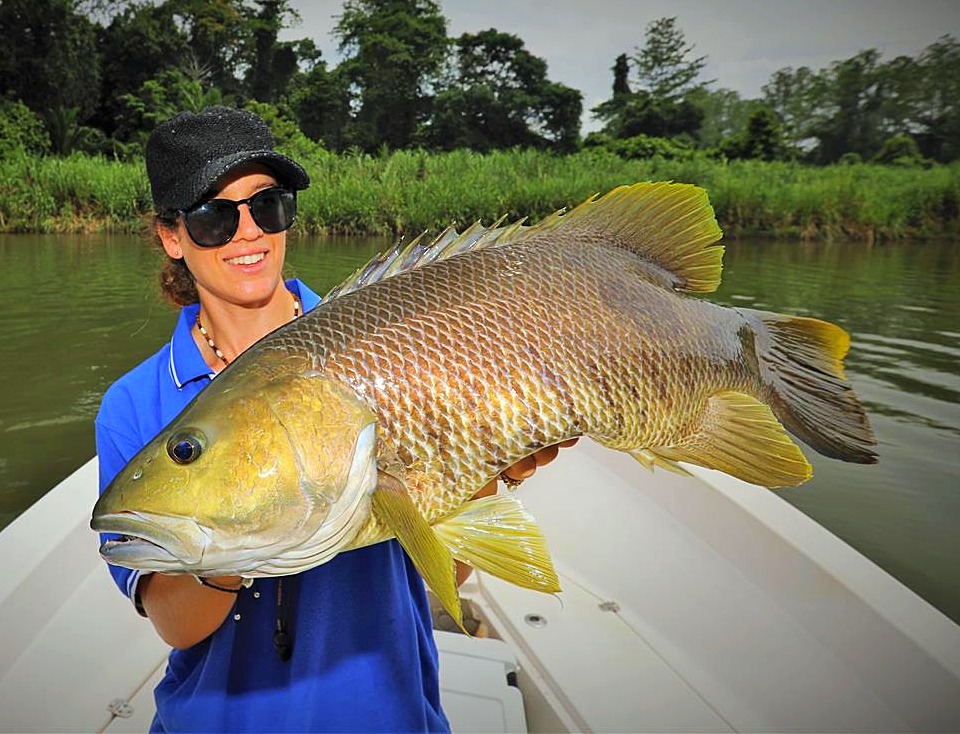 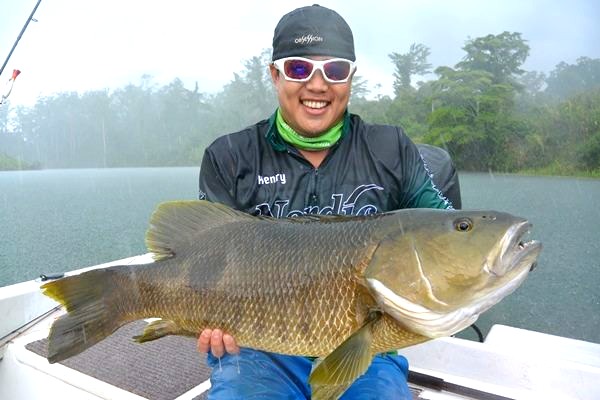 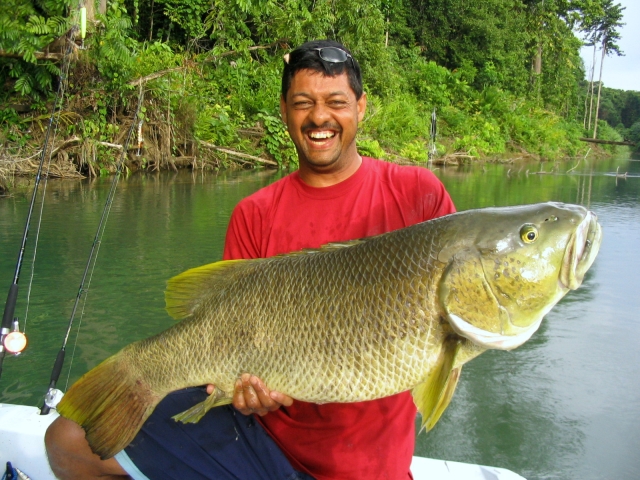 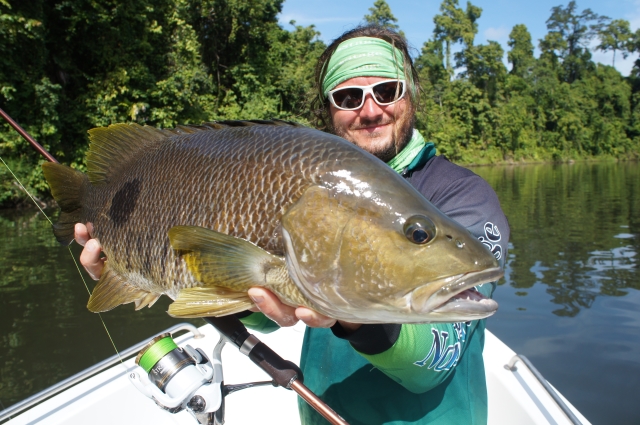 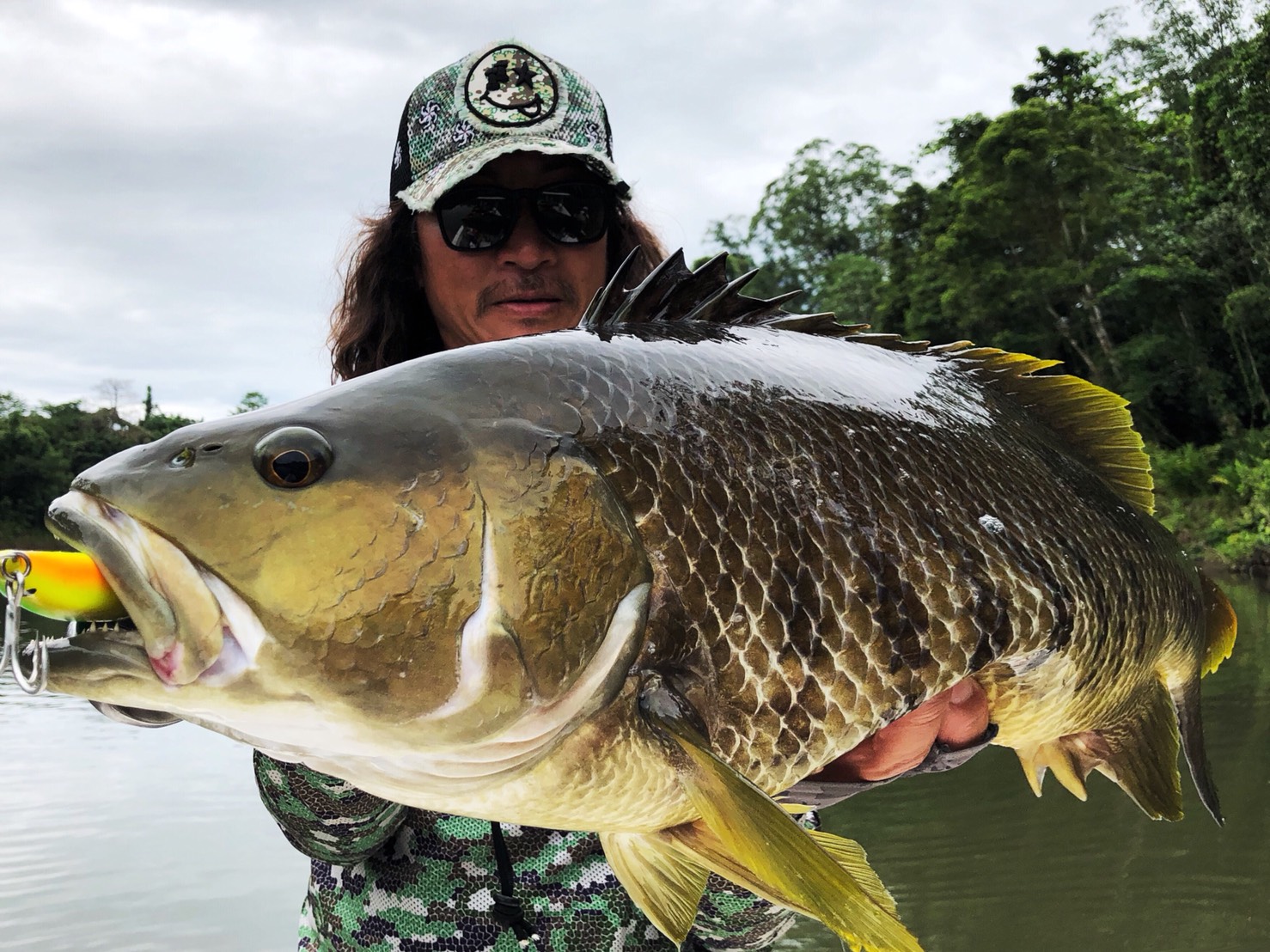 Alike the magnificent Papuan Black Bass above, the Spottail Bass is another bucket list fish that you can catch with Baia Sportfishing PNG. These are a freshwater species which are found in rivers only amongst snags and overhanging trees. If you ever tried to Google information about the Spottail Bass you won’t even find a Wikipedia article, leaving anglers no knowledge about the fish they are bound to catch with us. The Spottail grow even bigger than Papuan Black Bass and their bodies become more elongated as they grow bigger. In the pristine rivers of West New Britain, a range of animals that cross the rivers become a delicious meal. From frogs, worms, snakes, birds and smaller Spottail Bass you can use a range of poppers, flys and weird lures to catch one. Be warned, both the Papuan Black Bass and Spottail Bass head straight for the snags when hooked up, therefore your drag, hooks and line must constantly be monitored. The most common reason they get away is because you are not ready!

Habitat: Fresh Water Rivers in clean or murky water. Usually live among snags and under overhanging trees but brave enough to follow boats and attack lures on the last wind. They will also patrol down to the river mouth and swim in open water. 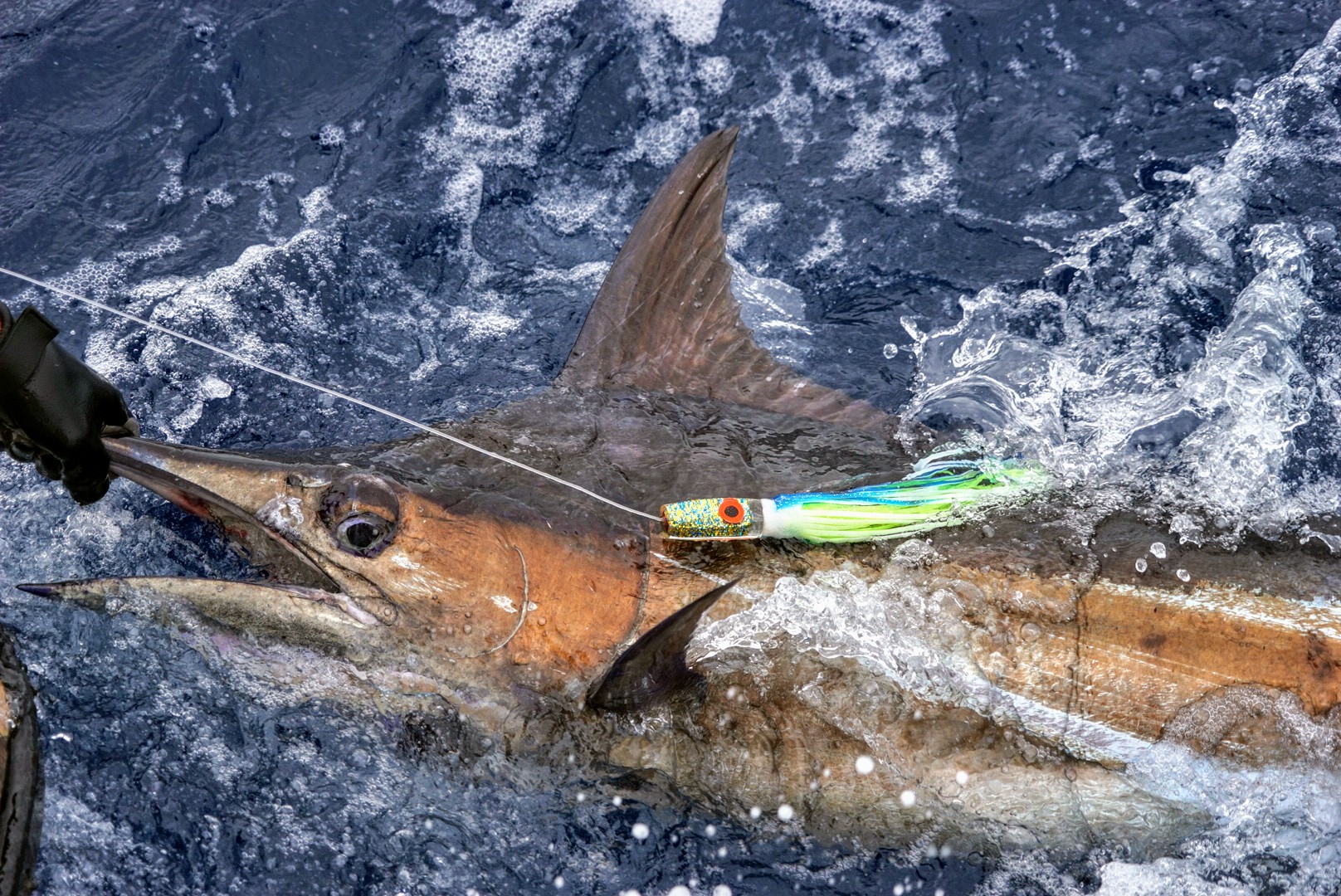 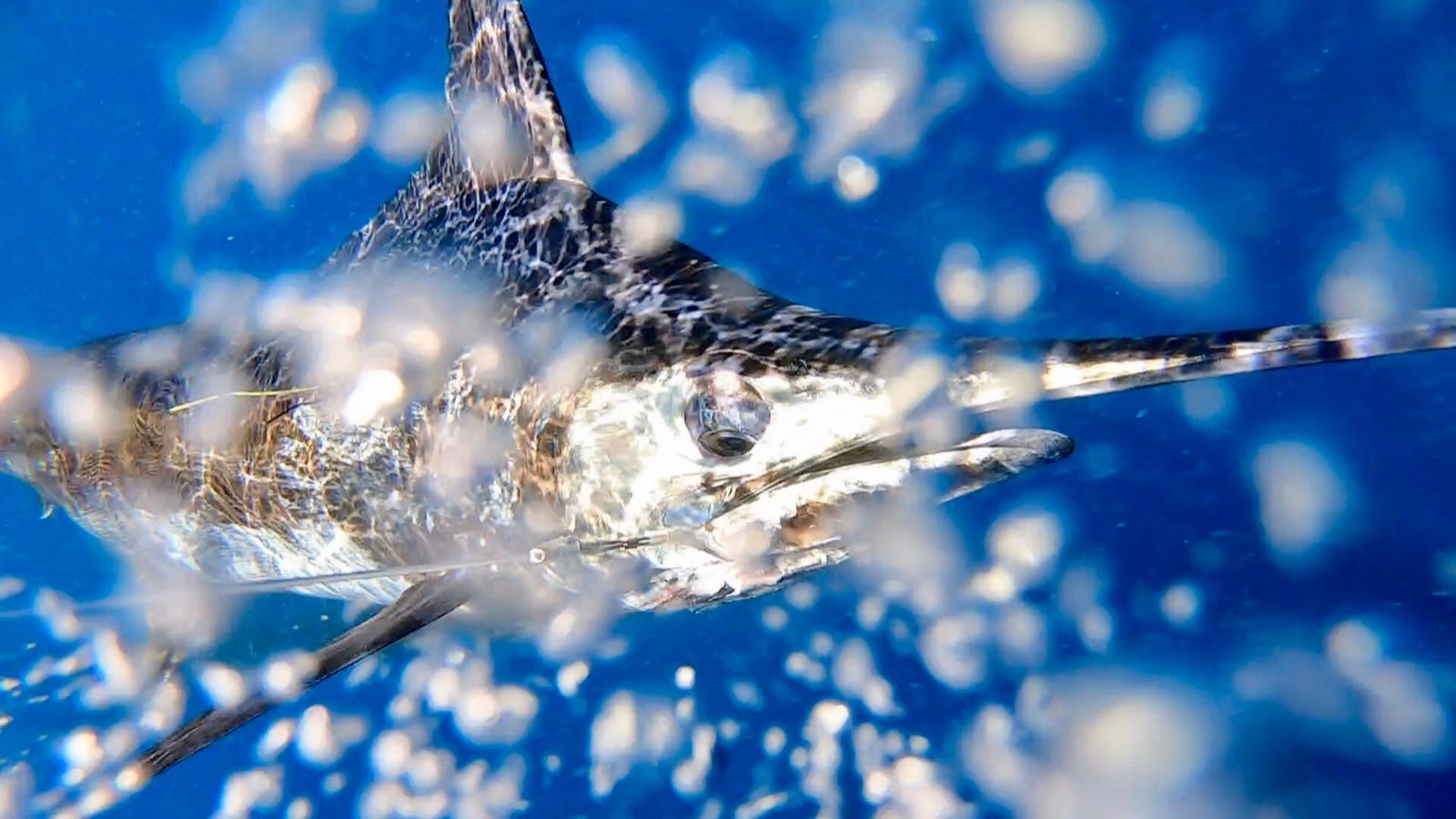 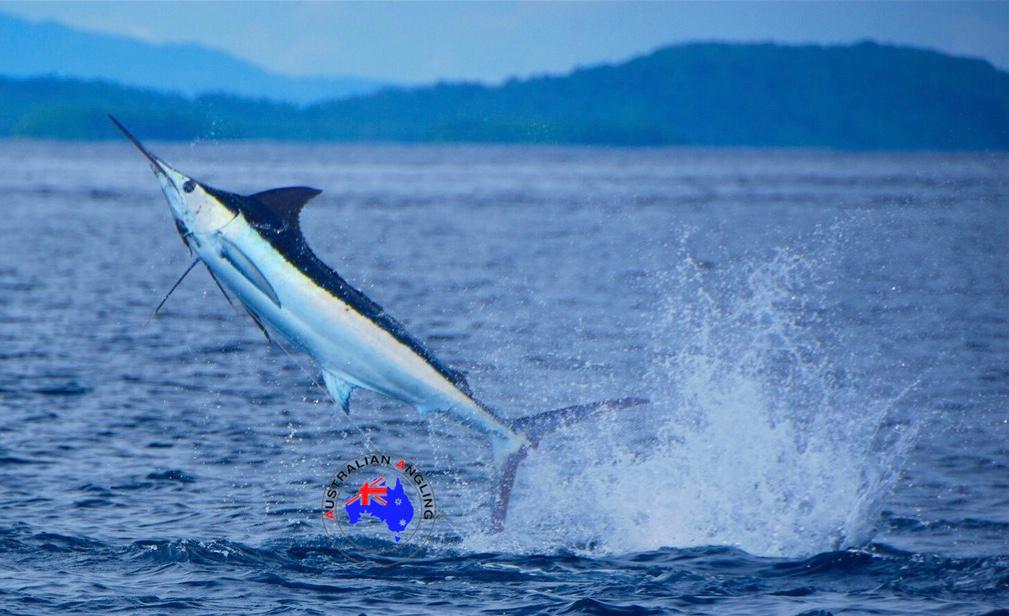 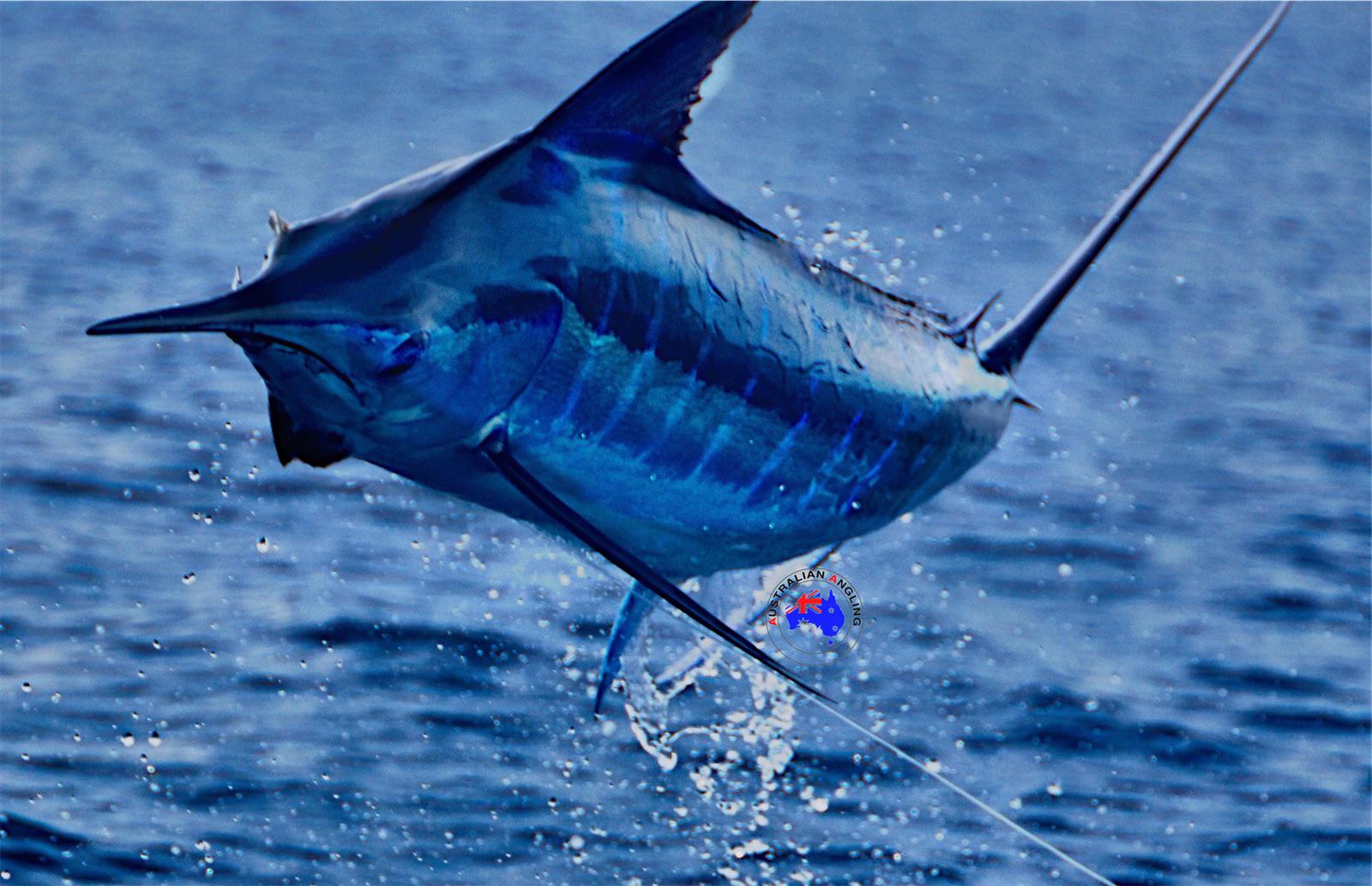 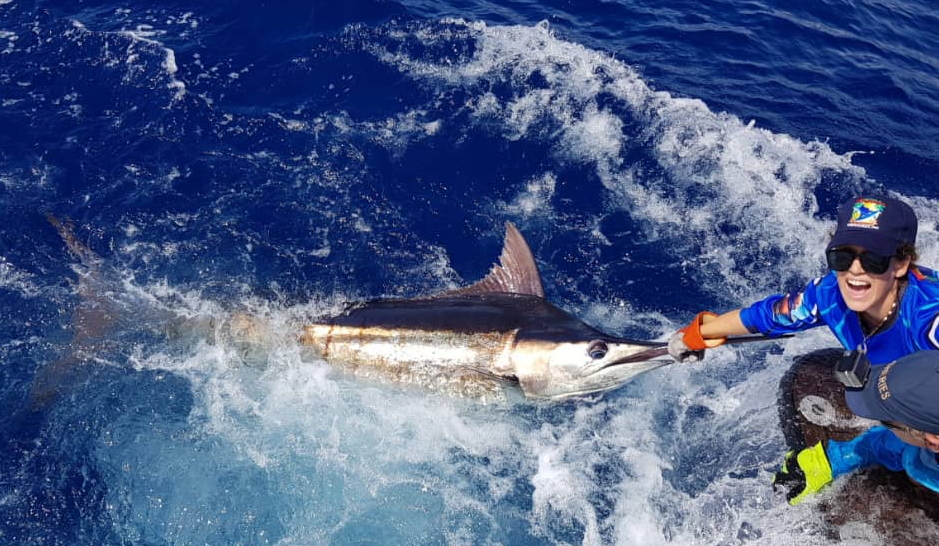 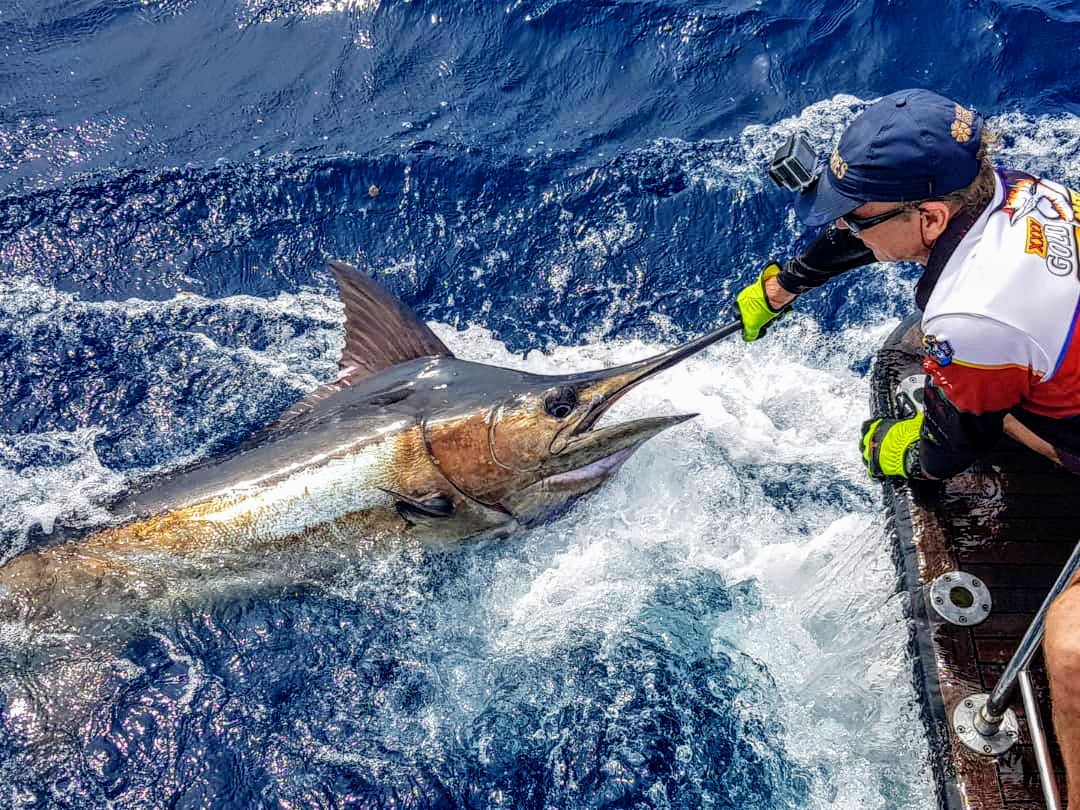 New Britain island is surrounded by deep blue water and is even situated above the New Britain Trench which depths are at an astounding 29,988 feet (9,140 m). The warmer currents attract a variety of tropical fish species the marlin prey on. This includes a wide variety of tuna including yellowfin, bigeye tuna, skipjack tuna and albacore. The blue marlin can be targeted around West New Britain all year, hunting around the many deep-sea pinnacles around the Bismarck Sea. Local banana boats have caught marlin even 3km offshore and size range from 50kg to a decent 200kg. When hooked up, be prepared for a fun fight as they dance across the surface or dive deep. The Tropicanna Billfish Tournament held in Rabaul last year successfully tagged 245 Blue Marlin and 3 Sailfish over the 9-day competition. World Class Game Fishing is right on the door step of the rivers we fish from! Marlin can be caught on board the Ultimate One when travelling between different fishing destinations.

Habitat: Blue marlins live in the deep, blue water of the ocean. However, they're known as "surface fish" because even though the water's deep, they prefer hanging around in the warm water near the surface. They're native to the Atlantic, Pacific and Indian Oceans. 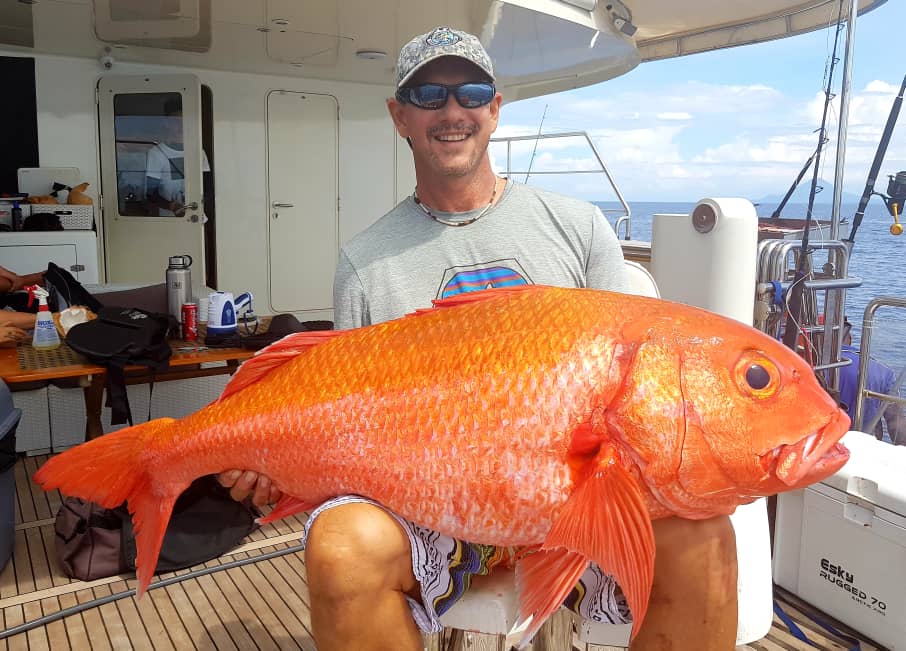 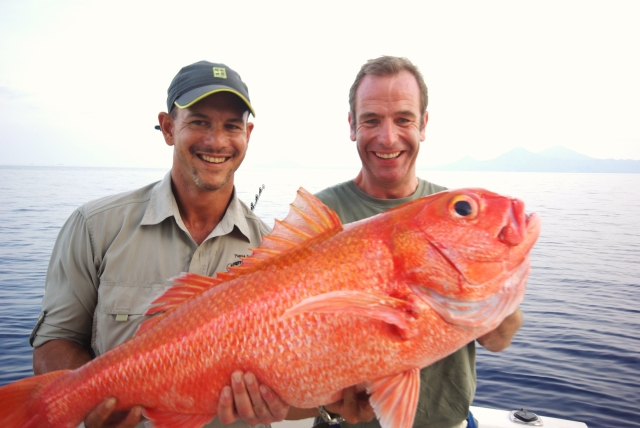 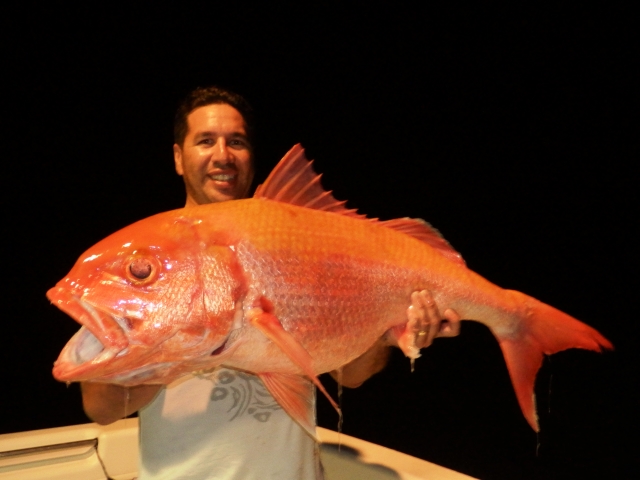 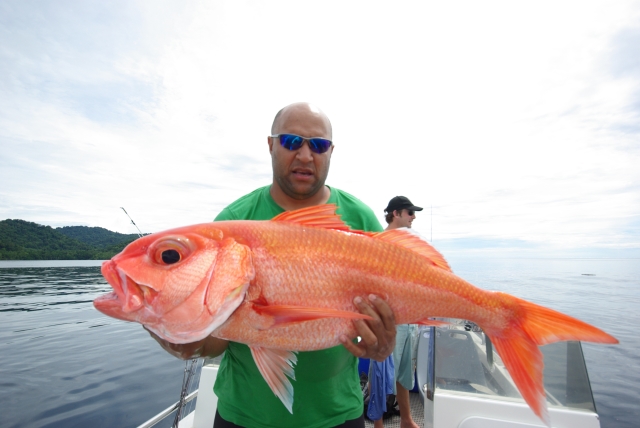 As seen on an episode with Robson Green, the ‘Giant Goldfish’ aka Ruby Snapper is renowned for its vibrant colours, big eyes and its delicate, mild sweet flavour flesh. These fish are known to live along the continental shelf and slope water from depths of 90m to 350, which makes the Bismarck sea the perfect habitat. The Ruby snapper feeds on fish, squid and crustaceans so taking that into mind, we use fresh tuna steaks on 2 circle hooks. Due to the significant depth we reach, baits are dropped by an electric reel and heavyweight sinker to 250 – 300m deep. It is a gamble on what you will pull up from the depths of the Pacific Ocean. Some nights, the electric reels are completely smoked with some monster fish on the other end. The suspect of this monster fish are giant oil fish that grow up to 200kg and 3m long! Nevertheless, catching a 50lb Ruby Snapper is another fish to add to your list. Encourage your wife that these are the only rubies she needs in life! 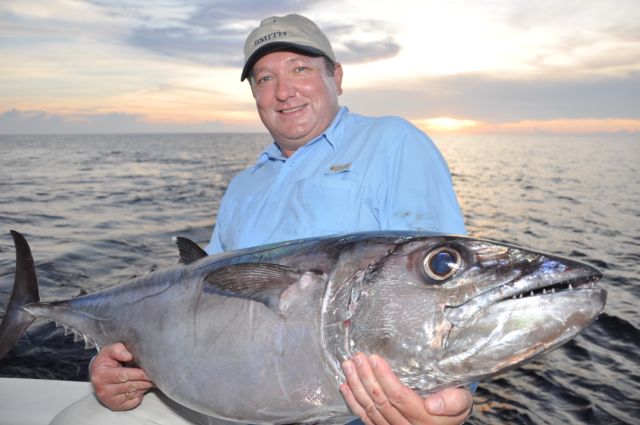 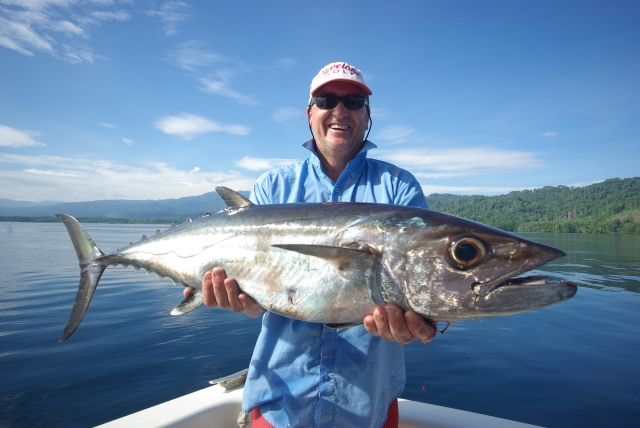 The tropical reels and vast depths of the Bismarck Sea bring about many predatorial fish like the Dogtooth Tuna. According to Fishing World, the Dogtooth is not technically a tuna but the largest of all Bonitos! This apex predator of the reef put up a mighty fight after hook-up and are great fun on jigging and popping sessions. Be prepared with heavy-duty gear popping to jigging rods capable of dropping 400g jigs. Once hooked up, their immediate reaction is to dive deep and usually cut you off. The size of Dogtooth ranges from 50kg to 100kg so keep that drag tight and hold on! These fish will test not only your gear, but your physical and mental abilities. Are you ready for that? Dogtooth can be caught during our Ultimate One expeditions to the volcanic Witu Islands where there are hundreds of mountainous pinnacles shooting up from the deep blue.

Folks, these are the Top 5 Fish to catch in Papua New Guinea but are by no means limited to it as there are other fantastic species you can catch in New Britain such as Napoleon Wrasse & big GT. The fish chosen above are the ultimate fighters of their environment, stunning in appearance and best of all, they are all caught within the Bismarck Sea. Baia Sportfishing has over 16 years’ experience in river and reef expeditions, family holidays and exploratory trips. We have a passion to make your fishing trip come true and give you the best experience Papua New Guinea has to offer through nature, culture and fishing. Depending on your groups’ preferences, here is how you can catch the TOP 5 of Papua New Guinea.

The 72ft Luxury liveaboard expeditions are available from 6-8 Nights long with a combination to fish river and reef. The trip is fully crewed and flexible to your fishing style. During your trip, you will have the option to target ALL the fish above. Ultimate One offers flexible locations and travelling by night allows you to fish during the day. If you wish to target black bass and Spottail bass, we will situate the boat by the rivers. By night we can do Ruby Snapper fishing and in between river and reef locations, target Blue Marlin and Dogtooth Tuna. The Ultimate One offers the Ultimate Fishing Adventure.

Accommodates 10 anglers with comfortable room, electricity, hot water, cleaning and cooking staff. The lodge has access to a range of rivers and reefs suitable for trolling, popping and jigging. Situated by Baia Village, it is a beautiful location surrounded by wildlife and magnificent Mt Ulawun volcano. Baia Lodge is suitable for those targeting Black Bass and Spottail Bass due to the close access to the 5 rivers. Additionally, GT, Mackerell, Red Bass, Maori Perch can also be caught nearby the rivers. Baia Lodge is a great hideaway location that will leave everlasting memories in your heart.

Is the perfect hideaway in PNG. Situated in Kove of New Britain, the island boasts gorgeous white sand, breathtaking sunsets and sunrises and an abundance of fishing spots from rivers to reef. The Island is the perfect destination for families who want to get away while fishos go out each day. Accommodating a maximum of 8 people, there are modern beach style bungalows with 4 rooms, hot water and electricity. Uluai Island has 4 rivers and an abundance of reefs to target Black bass, Spottail bass, dogtooth, GT, Mackerell, Red Bass, Maori Perch and much more! The fishing of choice is yours each day. The island is fully staffed and all meals are prepared for you each day.

Is situated in the heart of Kimbe Town and on the beachfront of Kimbe Bay. The rooms are fully air-conditioned and offer all the amenities any resort would offer from Free Wi-Fi, swimming pool, gym, bars, restaurant, tennis courts and more. The rivers are 15 minutes to 1.5 hours away and Bluewater fishing is only 30 minutes to 50 minutes away. The resort is perfect for families and couples. While other go fishing, others can enjoy the range of resort facilities, activities or land tours. At Liamo, you can target Black Bass, Spottail Bass, Mangrove Jacks and GT in the rivers or head to the underwater volcano pinnacle for Marlin, Ruby Snapper or Dogtooth Tuna. 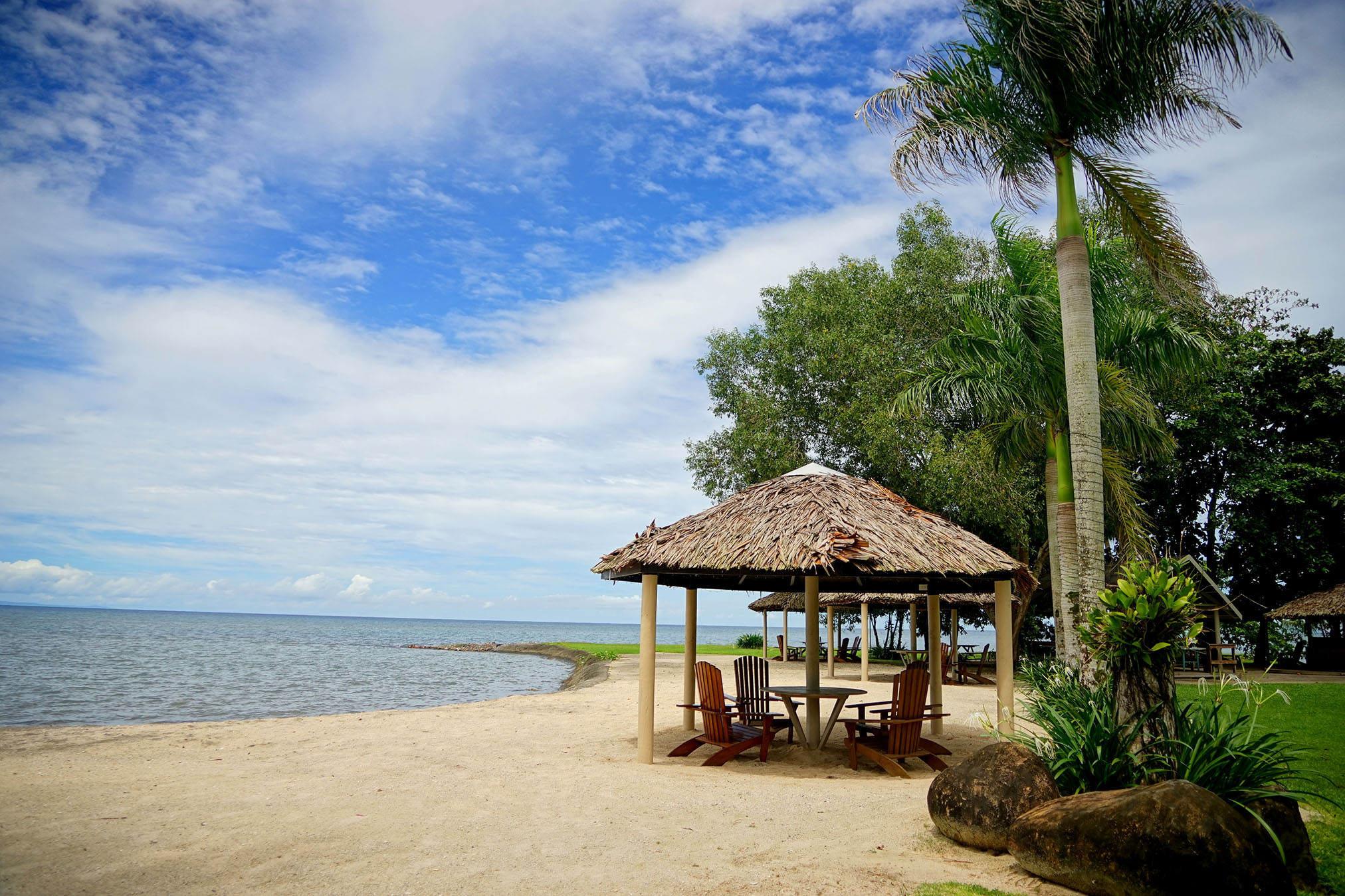 My name is Tiana Reimann and I manage the bookings and trips at Baia Sportfishing PNG. I would love to make your dream trip come true. I have taken families & anglers from all around the world and they all say there is no place like New Britain. I urge you to make PNG your next destination. I look forward to hearing from you. Tight lines!

The International Hunt: Black Bass + A Variety of Species!